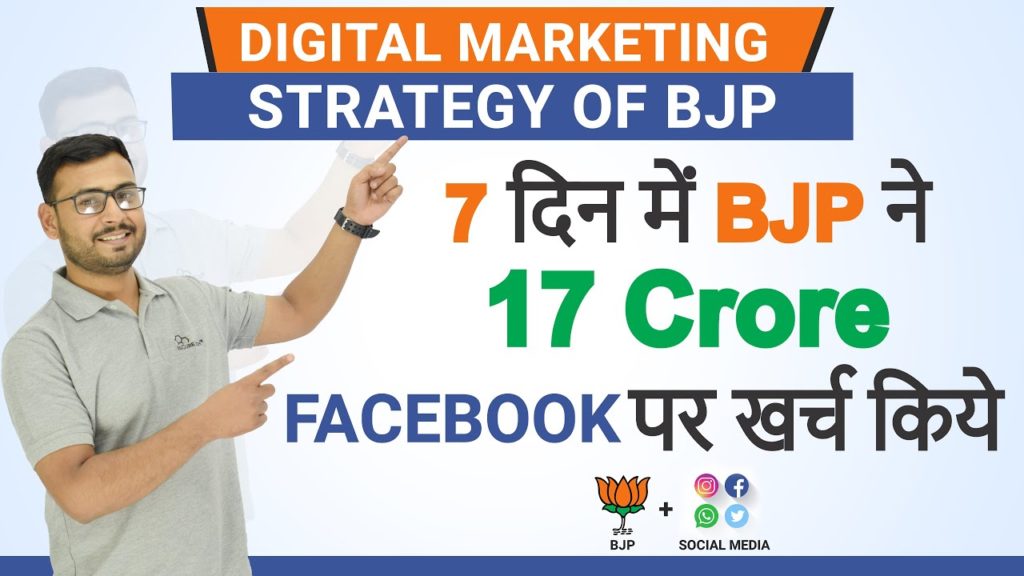 Let’s go back to the year 2009, another defeat of an Indian political party in the Lok Sabha election. This was the second consecutive loss of BJP. The party leaders realized that they should pull up their socks and set their goal, “election2014”.  Their strategy to win the 2014 elections was such a remarkable journey.

2014 saw the overwhelming win of BJP and 2019 too witnessed the same love and support. It is important to note that BJP understood the reach and acceptance of social media platforms. It left no stone unturned to rigorously market their “product”, Mr. Narendra Modi. The power of social media can lead to amazing outcomes.

BJP since 2009 has spent of 20 crores on digital platforms. Be it releasing a rap video on YouTube or making memes everything and anything has been done by BJP. Campaigns like Main Bhi Chokidar, Modi Hai To Mumkin Hai all have been amazingly crafted. Social media platforms were used brilliantly to gather the attention of the common man. They segregated the masses demographically, the current favorites of the India youth are Facebook and Instagram, memes and videos were made to interact. Twitter has another segment of active users, majorly who are mid 30’s people. WhatsApp too was used to circulate messages in various groups, by doing this it managed to reach out to the people who are not very much active on social media platforms.

Right before the elections of 2019, Modi’s interview with actor Akshay Kumar saw many mixed reviews. The interview struck a chord with the Indian youth. The interview was non- political, rather a casual talk with our Prime Minister. They realized that political interviews are not really needed at the moment. The conversation the two had was more of what he does on a normal day at work, even revealing about his love for mangoes. What an interview it is!

The love for videos was noticed and short comedy videos were made and posted. Through humor, BJP mentioned the work that was done since their last win. They made content around things which were trending. Like using the dialogue from the super hit Hindi movie called Uri to making a meme referring to Game of Thrones. The young generation obviously loved this humor-filled content and shared it constantly. Voila! Mr. Modi is trending on all social media platforms.

#ModiOnceMore was another unique campaign from BJP. It was such that you nominate one person and urge him to vote for Modi. Many such campaigns were created just to popularize BJP and Modi. And guess what it was successful. It all started with launching Modi by letting everyone know about his struggles as a child and that how he sold tea for a living and now the new rage is about his improvisations for the country.

Every political party has its presence on almost all social media platforms and everybody at their own level try to as convincing as they can. But only BJP has mastered the skill of digital marketing. In this kind of online environment, there is a huge opportunity for political parties to stand out and make the most out of social media. You can easily communicate with them and give them updates regularly in an effective manner. You need to position your “brand” (MODI) and be as interactive as you can. The more you are relating to your audience the better the chances of your success.